Not very pleasant today. I fell over a few times. Why do humans find it so funny? They all laughed at me. Still I had muddy paws…

Don’t tell me not to jump… 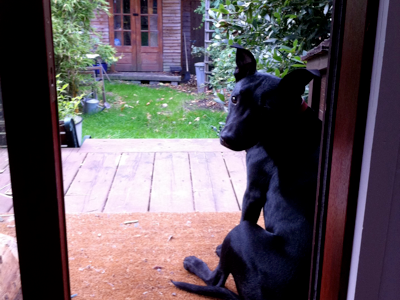 The day is not brilliant, I know we went for a long, long walk this morning (thanks! But it is good for you) met lots of dogs, I know you met an old school friend last night, that you’ve just played tennis badly and lost, that you’ve cleaned the house, that you are reading the papers, that you really look knackered… but I want to play! Come on it’s the end of summer! You haven’t shown any interest in me for at least three minutes, which is 21 dog minutes… 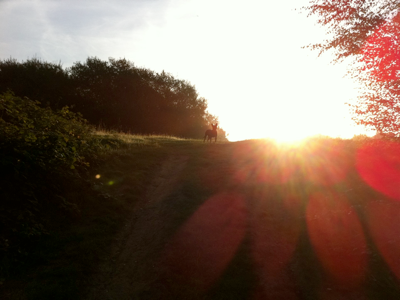 On the way back from work, I met Suzi quite unexpectedly and we started to play. Then this huge yellow labrador arrived, I say huge because although perfectly formed I’m not that big… So he just hung around and tried to play with Suzi, I am proud to say that she didn’t have much to do with him and focussed on me! I think she likes me. So we played for ages and ages until the adults realised that this dog was without a parent. I mean, it was so obvious, but humans can be a bit slow. This lost boy was quite pleasant and although not the sharpest knife in the butcher’s shop, was quite okay.

So with one adult reading his tag while my parent used a speaking device, the roles were like this because the light was fading and my male parents sight for small type isn’t so good. So he phoned a “number” and talked to with my sensitive eyes a very relieved human.

A few minutes later and lost boy was found, sad to see him go and he looked like he was going to be told off. Hungry now, can we go? 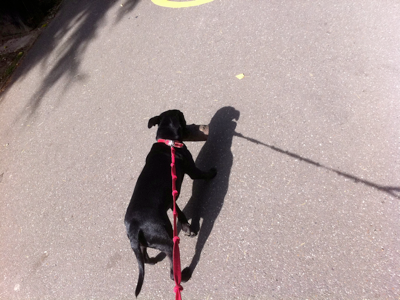 It was a lovely, wet day and I saw Suzi in the park. She was s o far away but i thought I’d go for it. Human male parent was not happy, but he was playing with my mind by saying “where’s Suzi?”, “She’s over there”, I said… This lack of basic communications is a bit annoying and I feel it is more a fault on his side, he could try more. So my only option was to run to Suzi. We played and arranged to meet later. Still wouldn’t let me have her ball though. 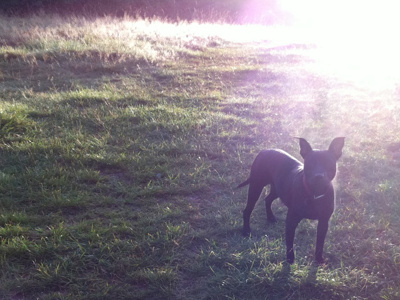 Really quite early, lovely misty morning, looking forward to the rest of the day. If you look closely, I’m steaming! Cookin’ , even. I am a hot dog and I can cut the mustard.

Today I will work on the beats for my album. Track one will be called: Looking. It is all about senses and non senses.

The album will be a concept one, so some of the tracks might feel like they go on forever and will test the endurance of any listener. It will be loud.  My music will not be pop but dog-umentary-rok. It is the sound all canines want to hear. It is street, it is lamp post, it is barking! Could even be Dagenham (one stop on from Barking)It will follow no rules and if endless repetition is required to get a reaction, then so be it. It worked for Warhol and he was an illustrator of shoes.

I am every dog. You will see. 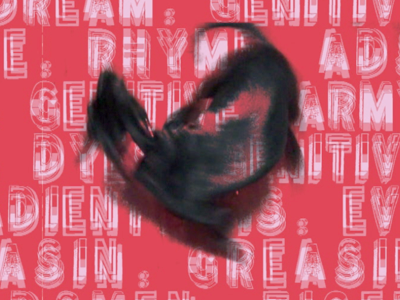 At last I can talk about this project that I’ve been working on. Have a look at the video. You can fast-forward because the only thing worth watching is me chasing my tail which appears at 1 minute 15 seconds. The rest of it is okay but I’m the real star (sorry Bob).

Bob Smith is a fellow artist and he insisted that I perform on this video. I do like Bob, we have so much to talk about, and he scratched my ears once, which was nice. 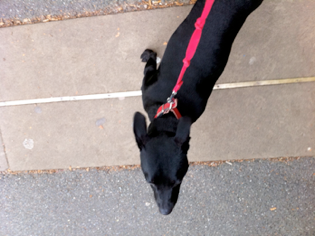 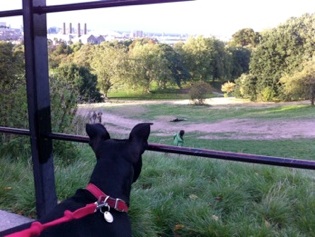 After hiding away I thought it was best to get out of London and re-group. I only saw part of that film and it did sound like Treedom…. Anyway I decided to visit my human grand-parents in Kent. Unfortunately I was a little overly happy to see them and they think I’m a bit wild… I was only being friendly and hope I haven’t blown it. I really liked walking in the orchard and sniffing pears.

On the way back I went to Greenwich to think about things, and to stand on the edge of time. Also saw a man roll down a hill, who’s wild now?

The album will be called PON-DO which means way of PON and it will have a subtitle “not much time”. Does the job and moves me away from the mistake of a few days ago. 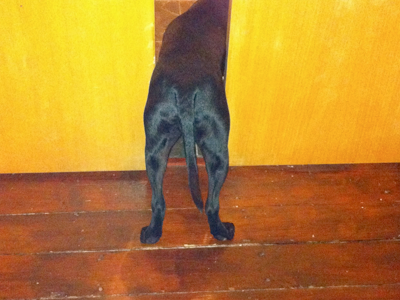 It has just been pointed out to me that the film Brave Heart was not about Treedom and trees… feel a little embarrassed, so I’ll hide. 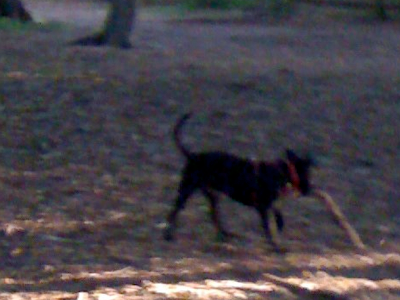 I’ve started my first album. Early stages, but it will be quite rocky with a touch of eighties pretension. It’s not the writing of the album that is difficult it’s knowing what to call it. I have spent ages thinking about this and want to avoid the obvious naming pitfalls:

Ponta, by Ponta, the album

being Ponta, by Ponta

the hunger, for pedigree

Suzi one of many

Well you know all the obvious stuff. So I’ve now settled on:

I saw this film the other night with some small Australian human pretending to be a big Scottish clansman with a blue face (Ha! A blue face that was sooo funny!) and he kept shouting TREEDOM! Aye, fight and you may die. Run, and you’ll live… at least a while. And dying in your beds, many years from now, would you be willin’ to trade ALL the days, from this day to that, for one chance, just one chance, to come back here and tell our enemies that they may take our lives, but they’ll never take… OUR TREEDOM! It sounded a bit like “freedom”, quite difficult to tell what with his broad Australian accent.  I thought this was a good play on words, “tree” and “free” in this film and there seemed to be a lack of trees in the film (or at least the bit I woke up to see), so it must have been about saving the planet and trees and the like, there were lots of rolling hills. It seemed to be a speech about taking a chance and living for the moment, which is exactly what I do. Here and now, thereabouts.

I do like trees (they are great for the environment and all manner of creatures call them home) so the album will be called Treedom after that rousing speech. Treedom! Hmm, should it have an exclamation mark? Or is that a tad too pretentious? 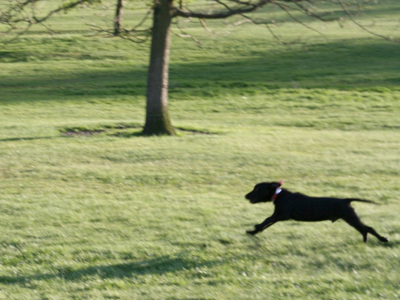 After yesterday, I felt so guilty. What with the recession and all, what was I doing destroying things? I have to behave well today or perhaps the supply of chewing bones will decrease. I’ll try not to pull on the lead. It’s a start.

We were walking on Hampstead Heath when I met my doppleganger! So much like gazing in the large window at home. Here in front of me was a very handsome chap called Vlad (I think the owner explained to my parent that Vlad was a name from a children’s book, a vampire who was a vegetarian, weird!). It was odd to meet such a similar creature to me. We hung around a bit, howled at each other and barked loudly. Oh, these are indeed happy, happy days, running in the grass, chasing, chasing… and then I became distracted… is it possible? But surely she’s normally here earlier… It was a vision of loveliness. It was my friend Panda, and she was so happy to see me. I could tell she was confused by Vlad but I’ve got longer legs… Vlad seemed to sneer at her a bit…and then it all got even more complicated… Suzi arrived! And she didn’t look too happy, what with me frolicking  so happily with Panda. I tried to explain it was nothing… just a dog thing… Vlad ran off laughing taking his ball… Oh, this was just too difficult, and for the first time in a week I understood what all that fuss was about with a certain premier league footballer, not that I paid for any of my ladies affections (no money, wallet or understanding of the fiscal system) or had a wife and small child (no testicles)… but from the look of Suzi I knew that I would certainly have to pay a high price for this minor indiscretion. Ooops… today started so well.

Trying not to pull, again, I went to work with my parent. Fell asleep under a desk dreaming of a life not muddied by relationship nonsense….Run! Ponta run, faster, faster! All with Vlad’s laughter as a soundtrack…. hungry now… Was Vlad real? There was something of the night about him.