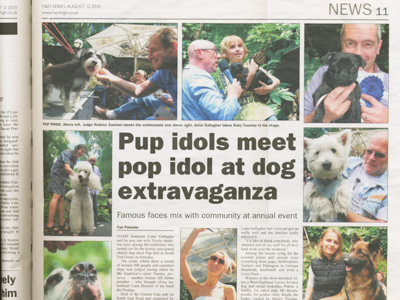 After protesting too much, I realised being in the paper was a good thing after all. All the other pups were well into it, and the ladies that I play with were very impressed. So with joy in my heart I opened the local paper… not having thumbs is a big problem but after many attempts I turned the paper to page 11. Horror! There were loads of photos but none of me..Also that pushy owner with that ugly pug pup was smiling at me with their blue rosette that says 2nd. 2nd! Ha! 2nd is nowhere baby! Maybe I would have been too much… I am a bit of a looker (as well as being an intellectual) so perhaps they chose not to use my photo because if they had used my image they would have had to use my image solely because the others could never compete and aesthetically the layout would suffer. I can take this rejection, as in fact, it is validity of my reluctance of being treated like an object. But I have to admit it did annoy me.

So  I started to read the article, pop stars, blah, blah..etc etc God journalism has really opened its doors to the post-o level generation, finger trailing under type, mouthing as they read…. So, ah, yes, here we are…winner of cutest pup was N-I-P-P-A, a staffie…What! NIPPA! Derivation of Nipper, a biter! violent dangerous dog…stealer of babies and terror of grannies…hmmm, Yes I am a staffie! But my name is Ponta. This was all getting too much. I won cutest pup and then some ill-informed canine-ist hack refers to the winner a staffie called NIPPA! It’s the owners you know not the dogs. Not all staffies are DEVIL DOGS but this one feels a little bit(t)er… and has a long memory. You took away my day in the sun but you cannot take away my dignity, my dreams, my ambition, my drive. I AM PONTA! And you will remember me, philosophically that is… because beauty is more than skin deep. Next year as a protest I will not enter best pup, even though I will not be eligible, the age-ist pup idol competition 2010 will be my last. Morally I occupy the only true position. 4 legs good.